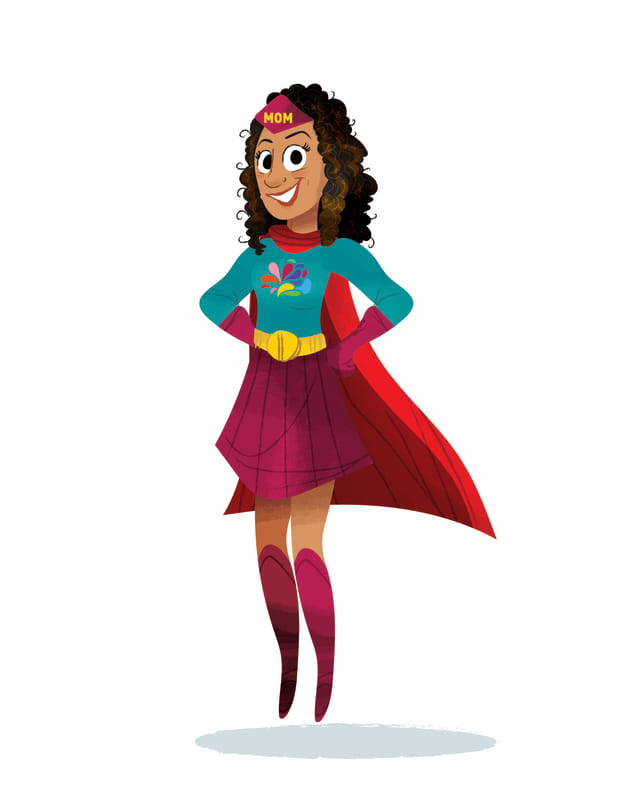 I know, moms. It’s gets confusing. Society and our well-meaning mommy friends voice compelling declarations from “You’re no superhero” to “Girl, take off your cape” and “You are not supermom. Ain’t nobody got time for that.”

But I truly believe we got it wrong. I mean, all the way wrong. Somehow, we created this woefully inaccurate depiction of female strength and fortitude – one that champions independence, self-reliance, and rugged individualism. Yet this perspective fails to capture the reality for many of the female superheroes we all know and love.

So, let’s breakdown this whole superhero concept. There are many modern-day female superheroes from Wonder Woman and Storm to Rogue, Jean Grey, and Catwoman.

While they are very different, these heroines all share common attributes and common challenges

Storm, born Ororo Munroe, was the daughter of a Kenyan tribal princess and photojournalist father. When she was 5 years old, her parents died tragically in a bombing. She developed claustrophobia after being buried under rubble near her mother’s body. She was an orphan and homeless until she joined a gang of thieves to survive. Years later she becomes part of the X-Men. With that group, she uses her powers, the ability to control the weather; create storms (tornadoes, thunderstorms, hurricanes); and manipulate electromagnetic fields, to fight her adversaries. Yet her emotional stability (or lack thereof) influences her superpowers; anger can lead to violent storms.

Like Storm, Rogue is part of the X-Men. She is a mutant, an outcast. Her skin produces high-voltage jolts and allows her to absorb the strength and power of anyone she touches. Yet, this gift renders her virtually incapable of close physical contact.

Catwoman, born Selina Kyle, is a thief residing in Gotham City. Her life has been fraught with tragedy. Her alcoholic father drank himself to death and her mother committed suicide. She also sustained a head injury in a plane crash which led to memory loss. Initially, she was the Batman’s nemesis but later became more of the antiheroine.

Each of these women wear a specific superhero getup complete with a cape and stylish accoutrements and armed with bravery, brilliance, and a butt-kicking squad. They are also women who are deeply flawed, who have made mistakes and who have faced unfathomable tragedies but still get up each day and put in some serious work despite their shortcomings, despite their pain.

So, today I boldly shout to all the mommas, “Mom, put that cape on!”

We, too, rock our go-to garb. For me, it’s leggings or moto pants with a cute tunic and my hair in bouncy curls. I am strong because I advocate for the voiceless; I fight mental illness using medications and therapy; I juggle motherhood, marriage, and medicine; and I can squat 130+ lbs. and crush out pull ups. I am brave enough to own up to my mistakes, apologize when I’m wrong, and try and fail. I have made stupid choices, I have let fear stop me from pursuing my dreams, and I have hurt those I love. I struggle with perfection paralysis. I have missed baseball games, track meets, and school programs. My house stays cluttered, and I NEVER know what’s for dinner. Yet, I’m still amazing. I’m still strong. I’m still enough – enough for my babies, enough for my husband, and enough for me. I am MOM! Hear me roar! And, you best believe I’m wearing my cape.

So, put that cape on, momma!

Yep! I said it. Ain’t no shame in our game. Put that cape on, and put it on right now. I don’t care if it’s sunshine yellow, teal, lavender, or lime green, just put it on. Twirl around in it. Shimmy and shake with it. Do a two-step and bounce with it. Put.It.On!

Because we got this, moms – flaws and all!